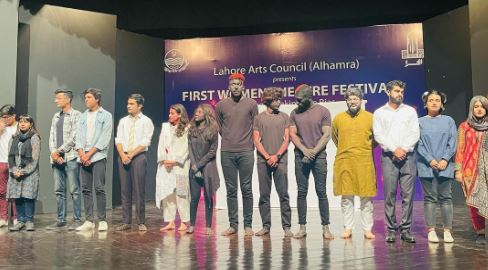 Dramaf recently had tha opportunity to perform at Alhamra. The invitation was sent all over Pakistan and six scripts were selected from there to perform at their “First Women Art Festival”. The theme was “breaking the bias”, and Dramaf performed their script “Takhayyul”, written by Mahreen Ghafoor, and directed by Rana Tabish Saeed and Hamna Rehman. The play was about the inner struggles, and prejudices that women have to fight against on a daily basis. The performance was highly appreciated by all the people in the crowd as well as the first lady of Pakistan who was the chief guest in the event. All the universities performing were awarded with Rs. 40,000. The festival started around 5:00 pm and
Dramaf was the first university to perform.